I graduated in 2012 from the University of Pittsburgh at Greensburg with a BS in biology. After working full-time for over a year, I began earning my master’s degree from the University of Pittsburgh’s Graduate School of Public Health. Following graduation in 2016, I immediately entered the Biomedical Science PhD program at West Virginia University. I joined Dr. Candice Brown’s lab and the department of Microbiology, Immunology, and Cell Biology in January 2017. In May 2017, I was selected to be supported by a highly competitive NIH T32 for Stroke and its Comorbidities (PI: Dr. James Simpkins). Since joining the lab, I have been working on several interrelated projects and have attended multiple conferences, including the International Stroke Conference in January 2018, to share my work. I also participate in several organizations on and off campus, including being an active member of the American Association of Pharmaceutical Scientists (AAPS), an officer in the Biomedical Sciences Graduate Student Organization, and a volunteer at Ruby Memorial Hospital.

My dissertation research focuses on tissue nonspecific alkaline phosphatase (TNAP), an enzyme whose function is to dephosphorylate both inflammatory and non-inflammatory substrates. Importantly, TNAP is highly expressed in brain microvascular endothelial cells, including those of the blood-brain barrier (BBB) and in specific populations of neurons. We hypothesize that enhancement or disruption of TNAP activity may serve as a therapeutic target in neurological disorders, such as sepsis and stroke, through the regulation of other proteins and their movement across the blood-brain barrier. More importantly, our mechanistic studies on the role of TNAP at the BBB could support TNAP administration as a therapeutic intervention to suppress neuroinflammation, limit neuronal loss, and loss of motor function as a result of BBB disruption.

My current project focuses on the in vivo and in vitro optimization of a bioassay to assess the inhibitory activity of SBI-425, a novel small molecule TNAP inhibitor. We will use SBI-425 to interrogate the role of TNAP as a regulator of BBB permeability in animal models of ischemic stroke, sepsis, and Alzheimer’s Disease (AD). Dysfunction of the gut epithelial barrier perturbs homeostasis within the microbiota-gut-brain axis, and this has been linked to the development of BBB dysfunction in AD, stroke, and psychiatric disorders. Our lab is employing 16S rRNA sequencing to address the central hypothesis that stroke and AD disrupt TNAP function within microbiota-gut-brain axis. 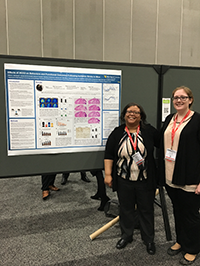